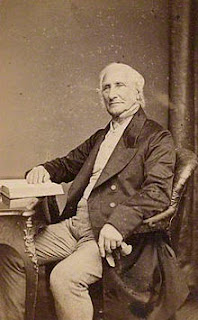 Edward Sabine was born on October 14, 1788 in Dublin, Ireland. He was the fifth son and ninth child of Joseph Sabine and Sarah Sabine nee Hunt. Sabine's mother died one month after his birth. He obtained a military education first at Marlowe and then at Royal Military Academy at Woolrich. He was commissioned as an artillery officer in 1803, becoming a captain ten years later, and he rose to the rank of general in 1870. Sabine was stationed at Gibraltar during the Peninsular War and saw his first action during the War of 1812. On his voyage to Canada the ship he was on was captured by an American privateer. The ship was eventually recaptured by a British frigate and he made his way to Quebec. Sabine served in the Niagara campaign and took part in the siege and assault on Fort Eire, serving with distinction.

He returned to England in 1816 and began doing research in astronomy, terrestrial magnetism, and ornithology. He became a member of the Royal Society in 1818. Also in 1818 Sabine served as astronomer during the Ross expedition looking for the Northwest Passage. During the expedition Sabine took magnetic readings of the Earth and studied birds, identifying a new species (Larus sabini). The following year Sabine took part in another Northwest Passage expedition, this time under William Perry. The expedition was the first to make it north of the arctic circle, returning in 1820. In 1921 Sabine received the Copley Medal for his various researches during this expedition.

For the next couple years Sabine toured the world taking measurements with his pendulum. The period of a pendulum depends on its length and the force of gravity on the bob at the end of the string or arm. Because Earth is not a perfect sphere (it is an oblate sphere which bulges at the equator) the distance to the center of the Earth is not uniform at different latitudes. This causes the gravity at the earth surface to vary at different latitudes with the acceleration of gravity rising as you move toward the poles. The period of Sabine's pendulum, swung at different latitudes, differed due to the differences in gravity caused by the differences in the distance to the center of the Earth. With this experiment Sabine demonstrated that the earth is not perfectly spherical. For this work Sabine was honored with the Lalande Medal of the Institute of France in 1826

When the British Board of Longitude was abolished in 1828, Sabine, with Michael Farady and Thomas Young, was appointed as a scientific adviser to the Admiralty. In this position Sabine advocated for the creation of magnetic measuring stations throughout the British Empire. Because changes in the Earth's magnetic field, which at the time were believed to be the result of weather patterns, affected compass readings these magnetic observatories were built. The observations from these observatories were collated by Sabine in London and he discovered that changes in the Earth's magnetic field were due to sunspot activity and the influence of the moon.

Sabine won a gold medal from the Royal Society in 1849 and served as its president from 1861 to 1871. Sabine was knighted in 1864 and has a crater on the moon named after him. The California grey pine (Pinus sabineana) is also named after him.

He died on June 26, 1883 and was buried in his family vault in Tewin, Hertfordshire.